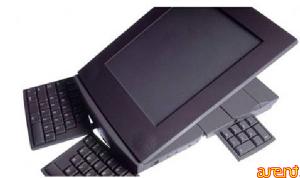 “tangerine’s first project for Apple, where Jonathan Ive began to make his mark. This was one of three concepts based on different types of mobile working. Workspace was for intense, static activity with high feature levels and the ergo “Harley Davidson” keyboard.”

Its an interesting object, and would be great to see a Harley Davidson keyboard in the next iPhone. The short pop-out keyboard on the side seems like a great idea too. So Blog-o-Sphere.. dose any one know more about this concept?